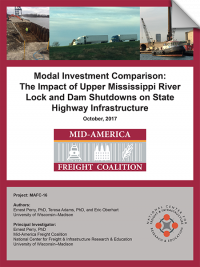 The Mid-America Freight Coalition (MAFC) has released a report on the impact lock and dam closures along the Upper Mississippi River would have on the parallel highways based on the increased truck numbers required to move displaced agricultural products.

Movement through the Upper Mississippi is facilitated through locks and dams, all of which were constructed between the 1930’s and late 1950’s. The U.S. Army Corps of Engineers (USACE) estimates that there are over $1 billion in backlogged maintenance costs for these structures. Given the age and maintenance backlog, a failure at any of these facilities, especially the southernmost, would divert agricultural products to truck or rail.

The report assesses the total impact of such closures and then demonstrates how the cost the closures, or improvements designed to mitigate their impact on the highway side, compare with the cost of improving Upper Mississippi River control structures.